Mazatlán is a large town and there are many different areas of Mazatlán that you will be staying in and going to!  Here is an overview of all the main areas that you need to know to visit or live in Mazatlán.

The main tourist zone is called the Golden Zone.  This is an area with many beachfront and non-beachfront hotels, restaurants, bars, and shops.

Heading north of the Golden Zone is Sabalo Country, then Marina Mazatlán, Cerritos, and Emerald Bay.  Sabalo Country is a newer section of the tourist zone similar to the Golden Zone, but a little less built out.  Marina Mazatlán is a new section of Mazatlán that has a huge marina, championship golf course, and thousands of condominiums.  Cerritos is a beautiful long beach area with luxury condominiums and hotels ending at a rock outcropping popular with surfers.  Emerald Bay is a sparsely populated bay that has one luxury resort and will be the future area developed. 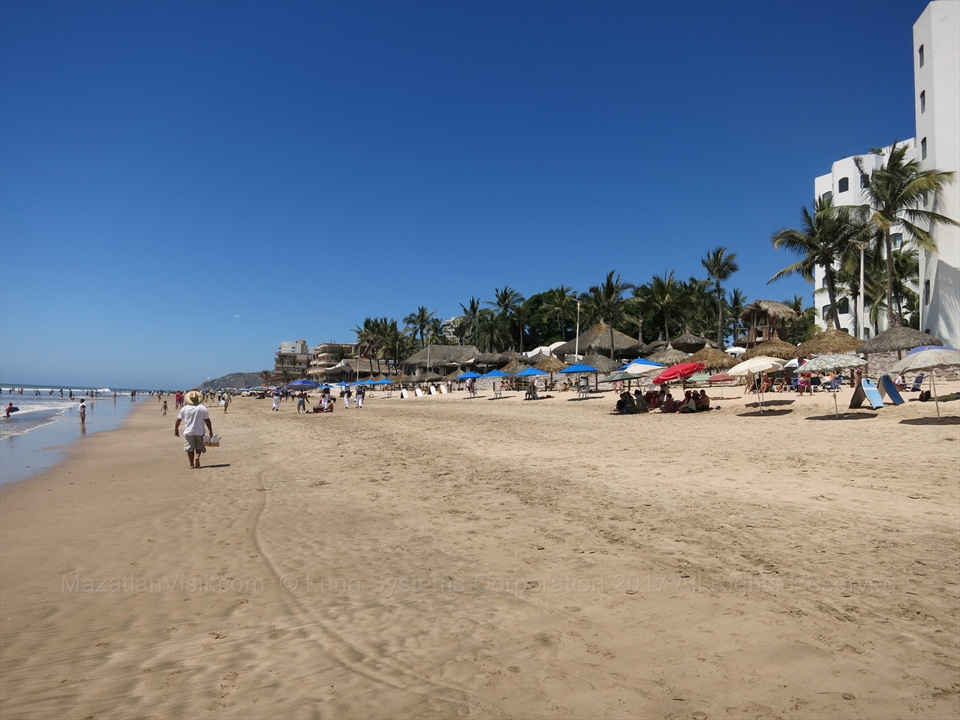 The Golden Zone ('Zona Dorada' in spanish) is the main tourist area in Mazatlán.  It is characterized by medium-sized hotels on the beach with a main street, Avenida Camaron Sabalo, running it's length.  There are many stores, shops, restaurants, bars, banks, and other services on this street.  Behind this main street are some residential areas such as Lomas De Mazatlán and Gaviotas.  The El Cid resort, one of the largest in Mexico is located in the Golden Zone.  It has hotel towers, a huge swimming pool, tennis courts, golf course, and housing development on it's property!   Originally, this area was a sand bar on the ocean with a swamp behind it, but the swamp has been filled in.  The Golden Zone is a good place to stay in Mazatlán if you are looking for a beach vacation with all the amenities that you would want within walking distance. 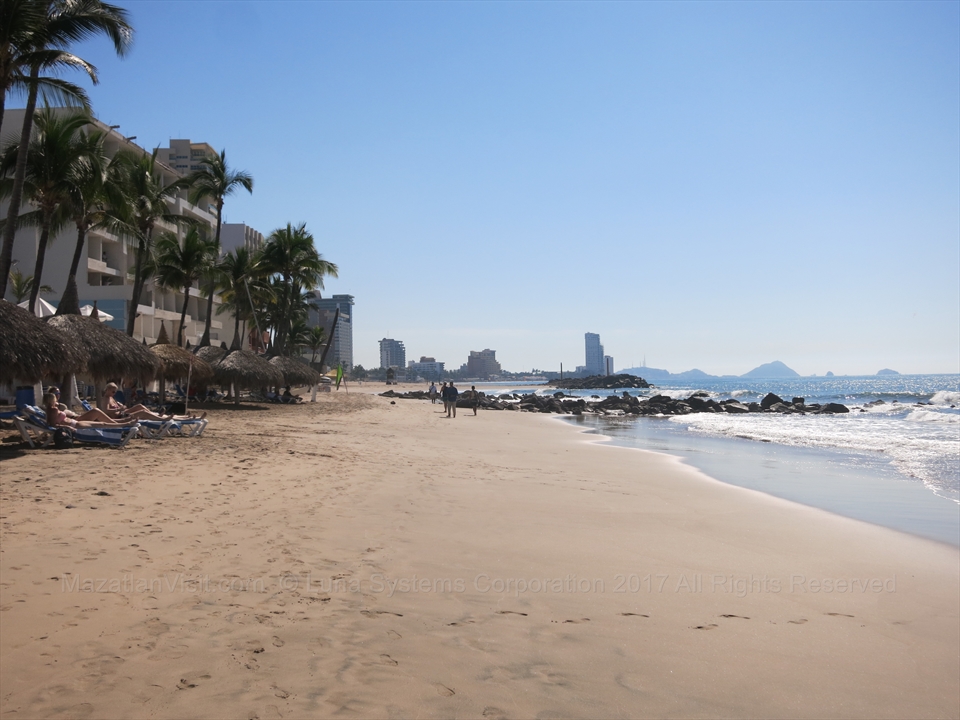 Sabalo Country is the area just north of the Golden Zone.  It is characterized by having a mix of hotels and condos on the beach with Avenida Camaron Sabalo running it's length.  There are some restaurants and shops on the street, but not as much as in the Golden Zone.  There is a large residential area on the other side.  Sabalo Country is good if you want a beach vacation that is much quieter than in the golden zone. 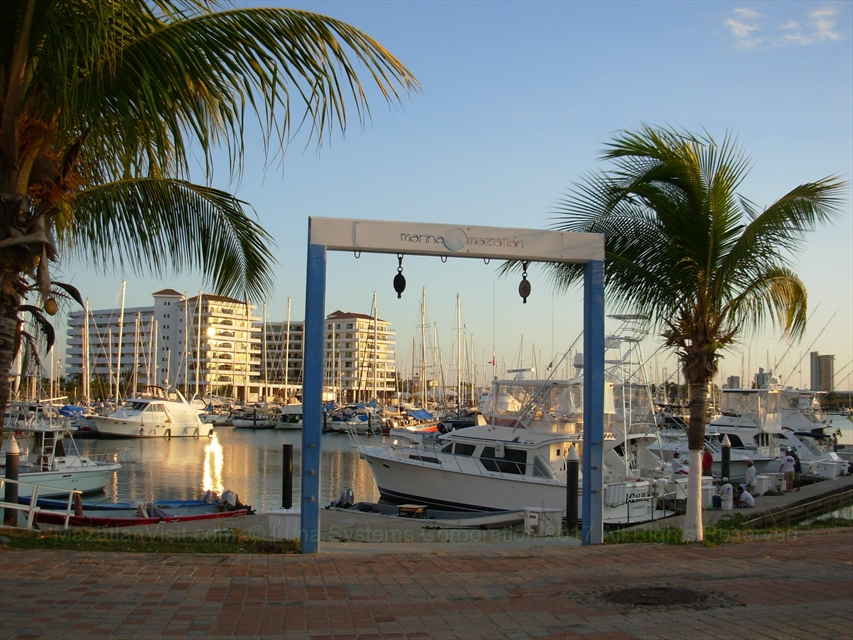 The Marina Mazatlán area is fairly new area that is characterized by many condominium buildings being built around many legs of a large marina.  It has one main marina area with a grocery store, shops, and restaurants.  Marina Mazatlán is not really close to the beach so it is an area where you would go if you are into boating or sailing.  It is also home to a championship golf course.  There is also a huge mall, Walmart, Sams Club, and Convention Centre nearby. 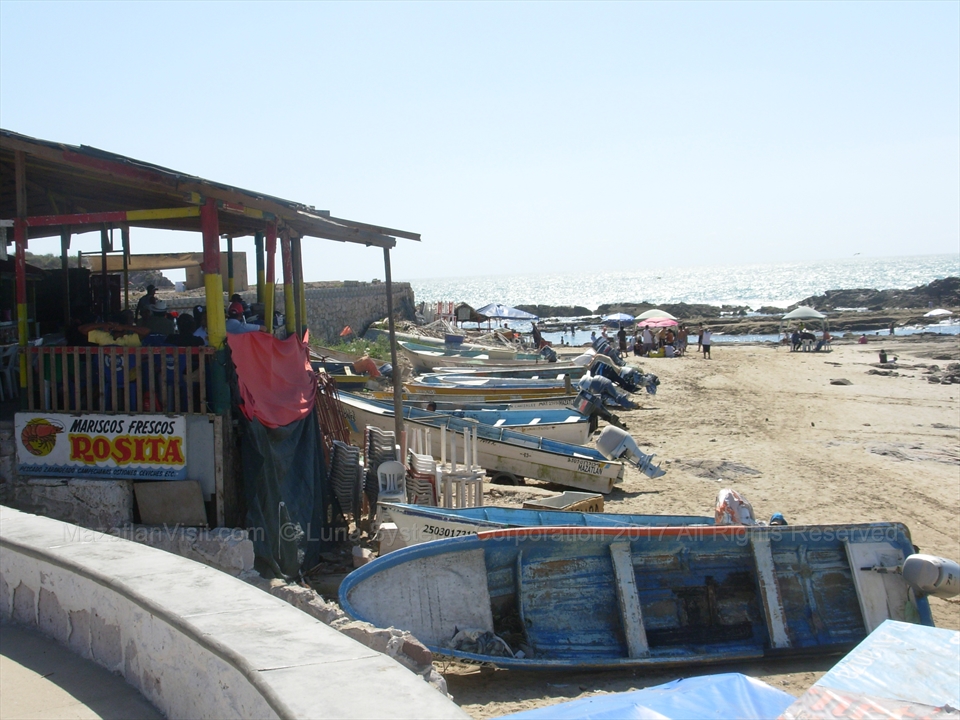 Cerritos is way north of the Golden Zone.  There is a point which is great for surfing.  At this point, there is a little strip of restaurants and shops.  Recently, the Riu Hotel, which is a large, all-inclusive hotel was built on nearby Bruja beach.  This area is just starting to be built out.  There are many condos that line Bruja beach, but only the Riu hotel.  There is also a large trailer park at Cerritos if you are an RVer!  There is also a large waterpark, MazAgua Water Park, close by.&nbps You are likely to be at Cerritos if you are staying at the Riu hotel or one of the condos on Bruja beach.  Cerritos is a very quiet area now.  Be aware that it is a long bus or taxi ride to the Golden Zone to/from Cerritos.

On June 8, 2018, there was a fire in Mariscos Flores at Cerritos point caused by a wood stove.  It was completely destroyed and 2 other restaurants were also affected.  We are not sure the status of these restaurants at this time. 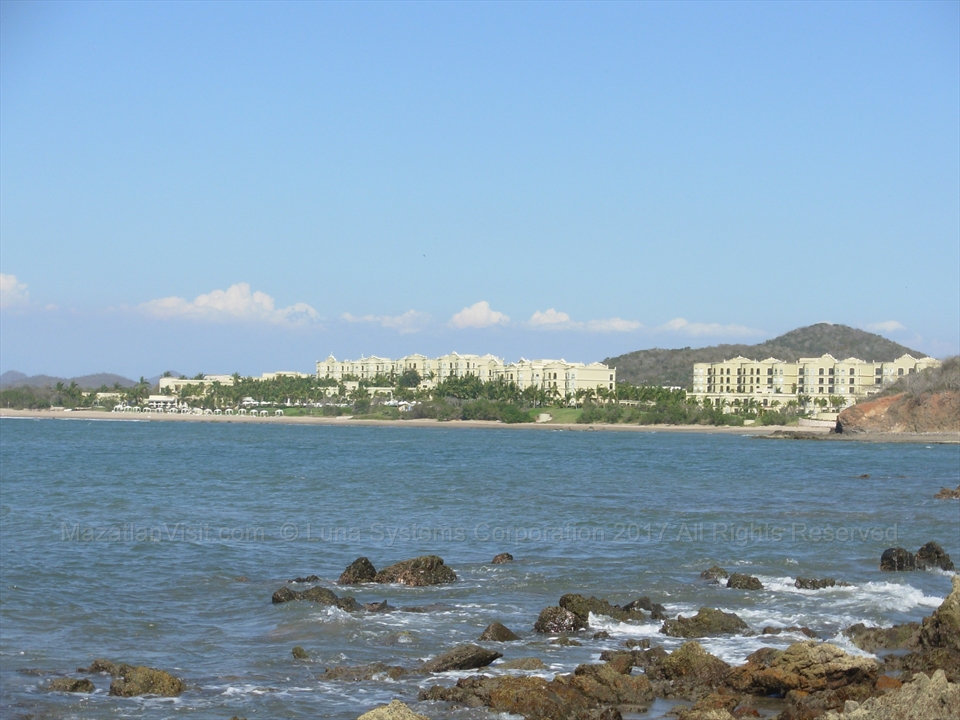 Heading south from the Golden Zone is Malecon, Los Pinos, El Clavadista, Olas Altas, Historic Old Town, Downtown, Port of Mazatlán, and Stone Island.  TheMalecon is a seawall that runs many miles along of the main bay of Mazatlán.  There is a beach along the entire malecon.  Across the street are primarily hotels and restaurants.  Los Pinos is a local residential area at the south end of the main bay of Mazatlán that has some longer term rental suites.  El Clavadista is a small area where the Cliff Divers dive from.  There are a number of monuments in the this stretch of the seawall.  Olas Altas is the small bay near downtown Mazatlán.  The seawall runs the length of the bay.  It is lined with hotels and restaurants.  Historic Old Town is the area behind Olas Altas that has some of the oldest buildings in Mazatlán.  It has historic plazas.  Next to it is the Downtown with it's famous Cathedral and municipal market.  The Port of Mazatlán is south of the downtown and is where the cruise ships dock.  Stone Island is not actually an island, but the beach south of the Port of Mazatlán.  You take a boat to cross the water from the Port of Mazatlán to Stone Island.  It has a beautiful long beach with many restaurants and a few small hotels.

The Malecon area is the area running from Fiestaland, the big white castle on the point, to Los Pinos, where the main bay ends and curves around to Olas Altas.  It is just south of the Golden Zone.  The malecon area is characterized by the beach in front of the malecon, then the main street Avenida Del Mar, then small to mid sized older hotels.  It is a number of miles long(3-5 miles???)  Behind the hotels is a large estuary for half way and residential housing for the other half.  There is a stretch near the North beach (playa norte) that has a bunch of palapa (grass roof) restaurants on the beach.  The Mazatlán Aquarium and Teodoro Mariscal Baseball Stadium are just off the the main street in this area.  These are semi-permanent and serve fantastic seafood!  The hotels on this strip are significantly cheaper than in the Golden Zone and north.  They are frequented more by Mexican national tourists than by Americans and Canadians.  This would be an area that you would stay in if you wanted to spend less on accomodation and don't mind crossing a street to get to the beach. 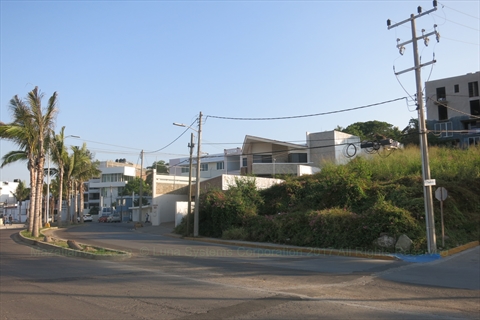 Los Pinos is the area in Mazatlán where the Malecon goes from Avenida del Mar to Paseo Claussen.  It is basically a residential area where there are some rental apartments that are generally a little less expensive to rent than in Olas Altas or the Golden Zone. 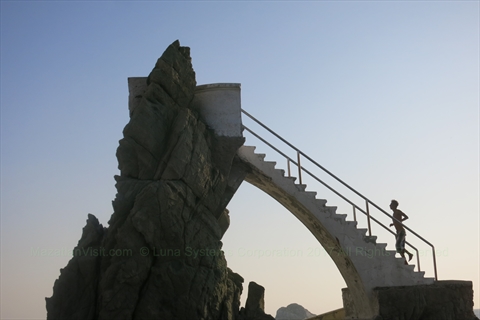 This is the spot on the malecon on Paseo Claussen where the Cliff Divers dive.  There is a pullout for vehicles and a platform from which the cliff divers dive.  There are also a number of monuments and the Devil's Cave in this area. 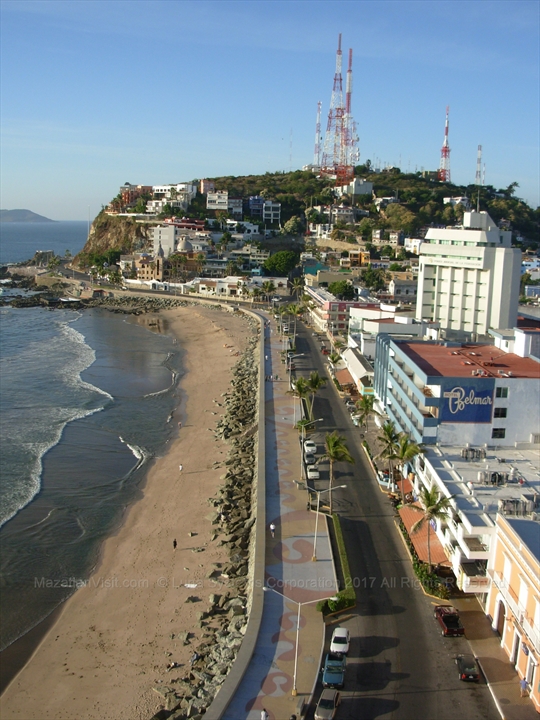 Olas Altas is a small bay where the oldest part of of Mazatlán is located.  Olas Altas means "high waves" in Spanish.  Olas Altas has a small beach with a seawall runs the entire length of the bay.  Across the road from the seawall are a number of historic hotels, restaurants, and bars.

In January 2017, the city installed new beautiful street lights along the seawall of Olas Altas. 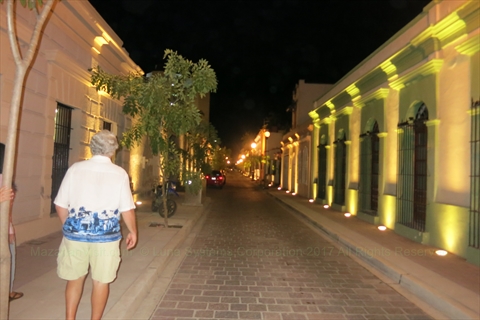 Between Downtown Mazatlan and Olas Altas is called the Centro Historico.  It is characterized by many old building (up to 500 years old)!  It is also home to the Plaza Machado, Angela Peralta Theatre, art galleries and museums.  Many retired Americans and Canadians live in this part of town.  No visit to Mazatlan would be complete without a visit to the Historic Old Town. 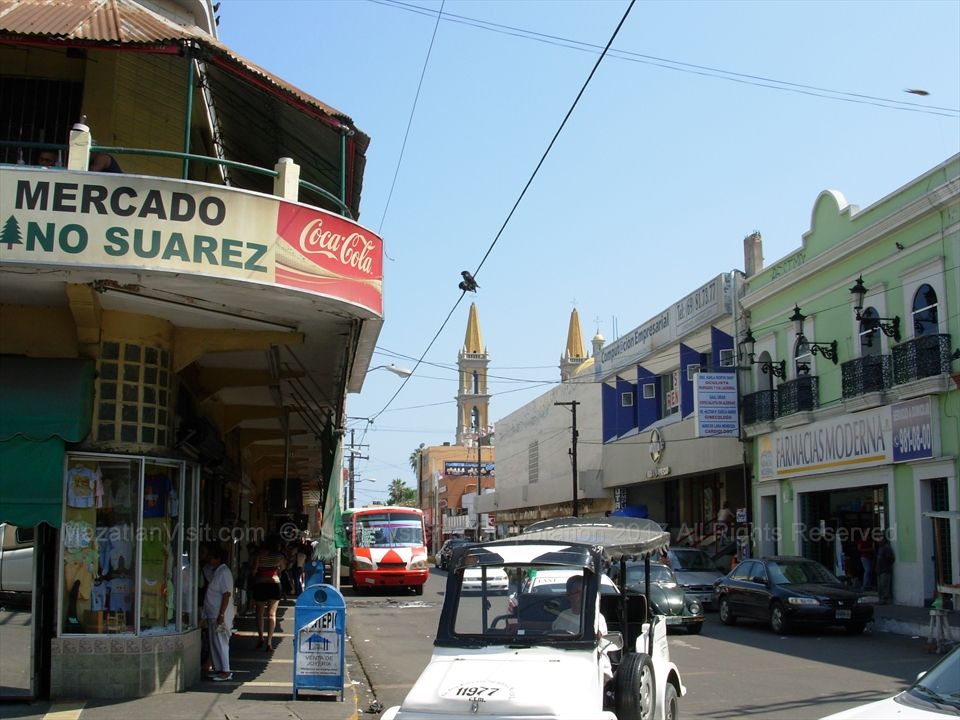 Since Mazatlán is a large city, it does have a downtown Mazatlán.  This is a concentrated area of shops, department stores in the area surrounding huge Cathedral.  In the downtown is the large municipal market where you can buy fresh food.  There are frequent traffic jams in the afternoon because the streets are so narrow and the downtown is so busy.  Not too many Americans or Canadians stay in this part of town.  Many tours will take you to the Cathedral and market.  It is worth a visit to this area to see what a mexican city is like. 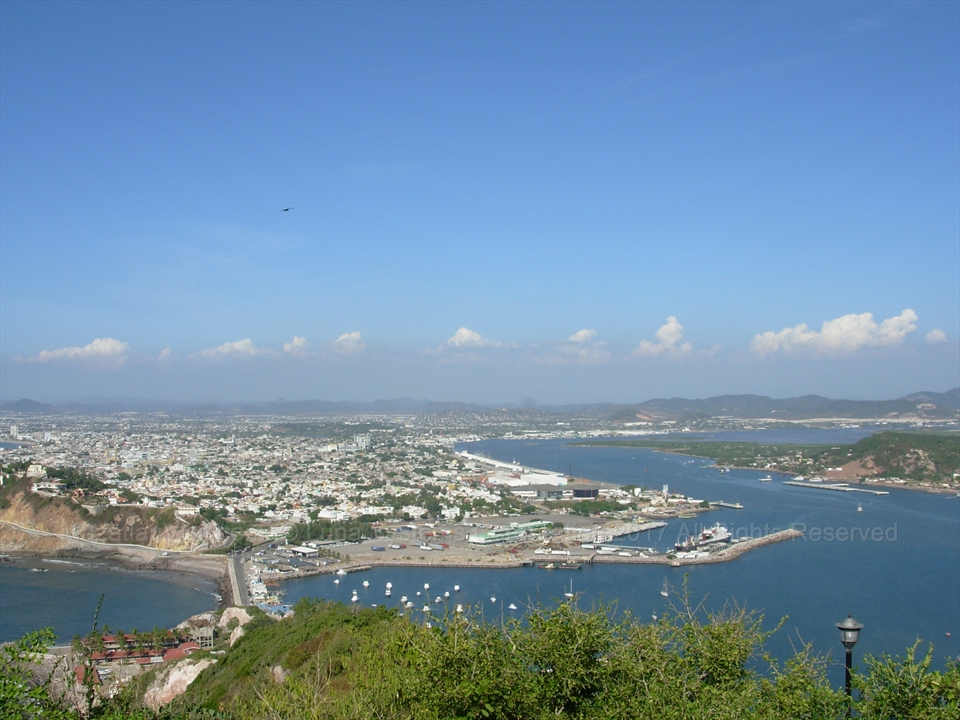 Mazatlán is a large port city.  Many goods are imported and exported through the port of Mazatlán.  There is also a car ferry to/from La Paz on the Baja pennisula.  Many cruise ships visit Mazatlán every year and the ships dock at the port.  You can walk to downtown Mazatlán from the cruise ship dock but it is probably better to take a taxi or bus.  At the entrance to the port is the El Faro Lighthouse which is the 2nd highest lighthouse in the world.  On the road below the lighthouse is the sports fishing fleet.  There are also small boats that you can take to go to Stone Island.  There aren't many restaurants or shops around the port area so it is more likely you will just go to/from your ship to other parts of Mazatlán. 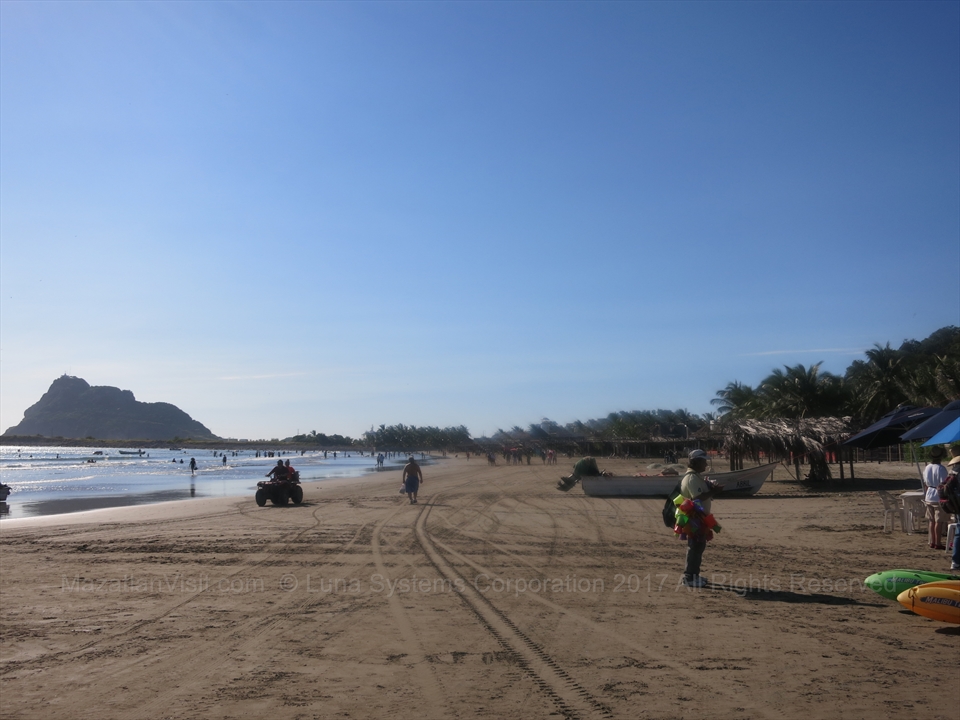 Stone Island isn't really an island, but the beach area south of the Port of Mazatlán.  It is characterized by a long wide beach with small waves because it is protected by an island.  There are a couple of very small hotels and many outdoor palapa roofed restaurants.  This is a popular day tour area for people that visit Mazatlán.  You will likely just go to stone island for a day trip, but it is worth it as it is a beautiful beach!